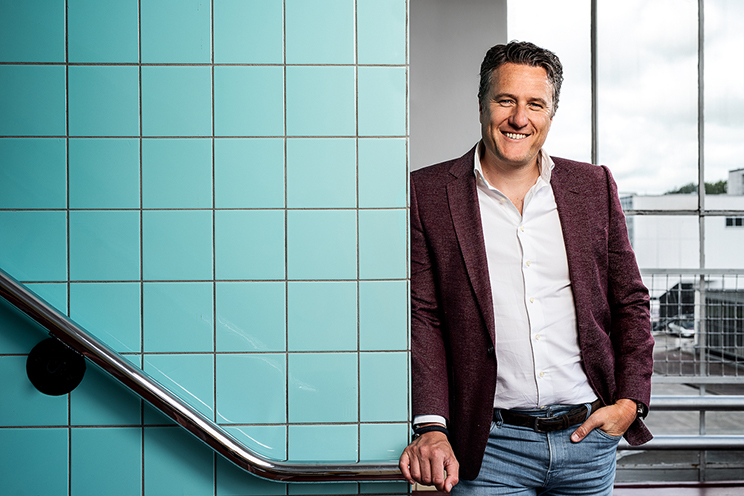 Hortibiz Daily News Editor Ece Polat talked with Blue Radix CEO and Co-Founder, Ronald Hoek, about the growth of the company and his vision on the use of AI in greenhouses. [MvR1] Ronald also explains why growers choose for autonomous growing and what the main differences are between data-driven and autonomous growing. 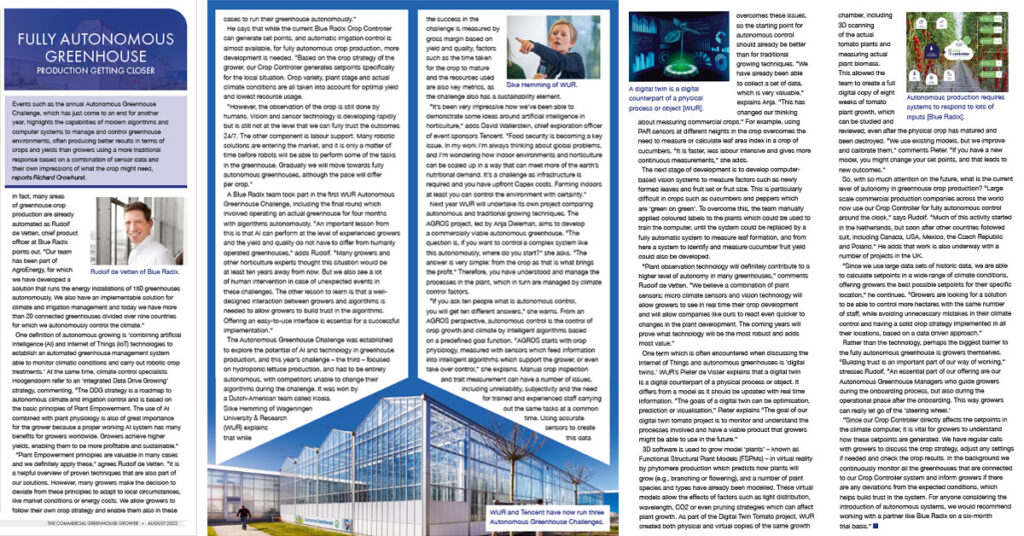 The Commercial Greenhouse Grower magazine from the United Kingdom published an 2,5 page article about Autonomous Growing in their August issue. The article highlights the capabilities of modern algorithms and computer systems to manage and control greenhouse environments. Rudolf de Vetten, Chief Product Officer at Blue Radix, Silke Hemming, Head scientific researchteam Greenhouse Technology of WUR and David Wallerstein Chief Exploration officer of Tencent, among others, talk about the developments of autonomous greenhouses. From execution of Autonomous Growing in commercial greenhouses to the Autonomous Greenhouse Challenges and new projects and research. 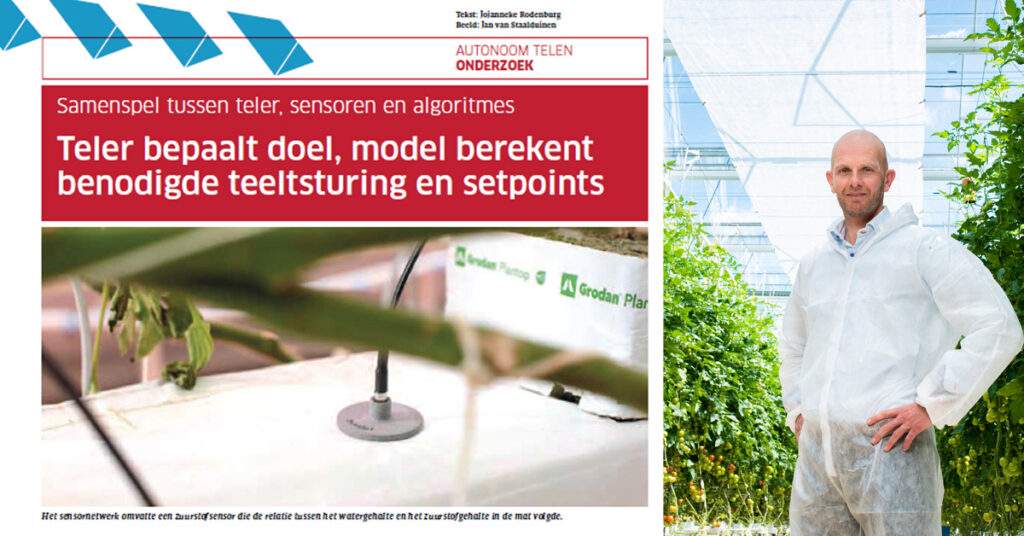 In the January edition of the Dutch Onder Glas magazine an article on the completion of the TKI project ‘the road to digital green fingers’. Two seasons of research took place with an illuminated tomato crop (large trusses) in which first a sensor network was developed and eventually the climate was controlled with smart algorithms. In this article, Jan Hanemaaijer, Crop Advisor at Blue Radix, among others, talks more about his involvement and findings. Read the entire article via the link to the pdf of the article. 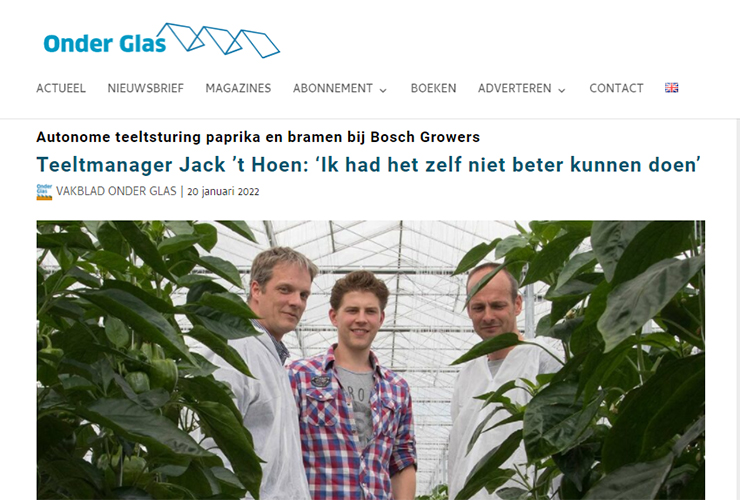 In the newsletter and website of Dutch media ‘Onder Glas’, Crop Manager Jack ‘t Hoen of Bosch growers was interviewed about autonomous growing with Crop Controller. Since last summer, Bosch Growers in Bleiswijk, the Netherlands, are controlling their cultivation in one department by autonomous growing software during the day. Crop Manager Jack ‘t Hoen tells that the algorithms work so well that today the switch was made to fully autonomous control 24/7. He has every confidence in it. “The results are continuously on the line that was set out. I couldn’t have done better myself.” 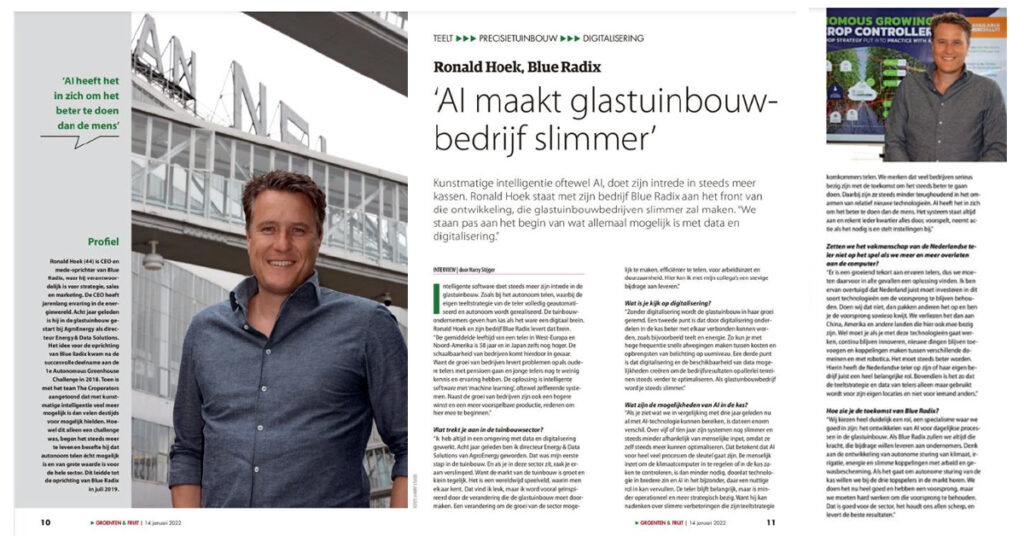 Dutch Groenten & Fruit Magazine and GFactueel.nl published an interview with Ronald Hoek in mid-January about the entry of AI into greenhouse horticulture. What does the future look like? What is the role of the grower in autonomous growing and why do growers choose this? Read more in the summary of the interview. 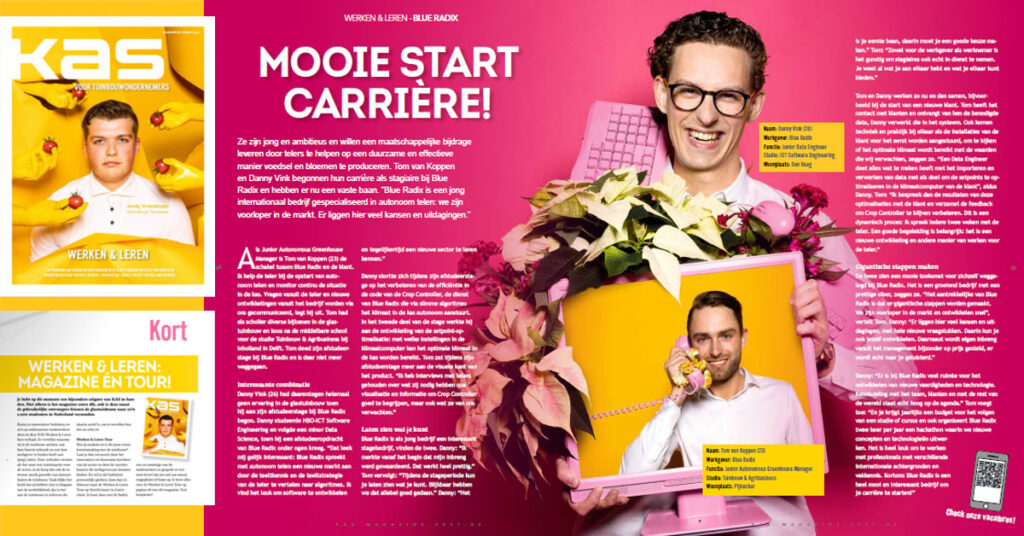 In a special December edition of KAS Magazine with the theme working & learning, 42 employees from the Dutch horticulture sector talk about their work, ambitions and the importance of education. Tom and Danny of Blue Radix are also interviewed in the magazine as they started as trainees at Blue Radix and are now employees. They explain more about their internship, jobs, the great start of their careers at our company and also about the learning opportunities. 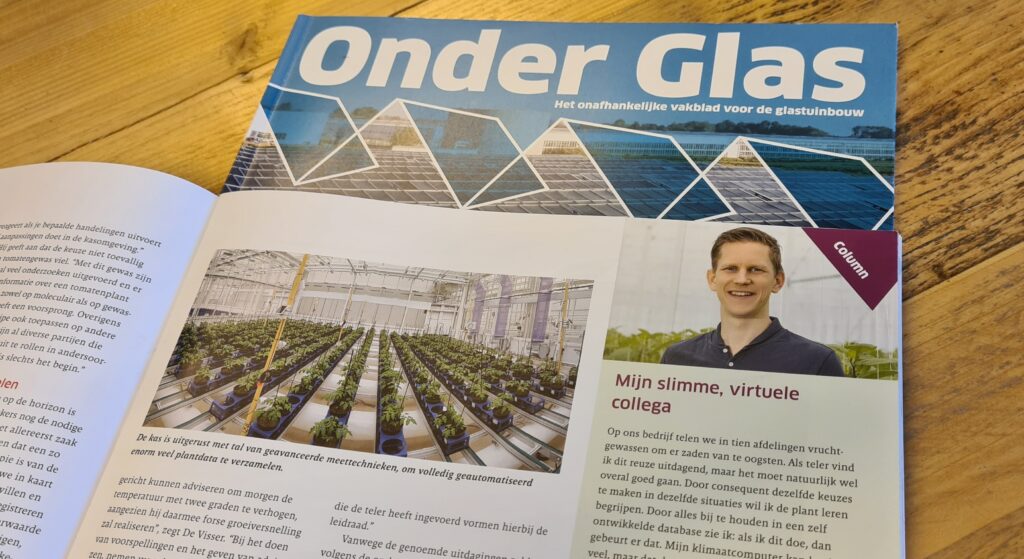 In the November issue of Dutch Onder Glas Magazine, Maikel van den Berg of MR Seeds wrote a column about autonomous growing with Crop Controller. He describes how the autonomous implementation of his crop strategy has given him a new smart virtual colleague in the greenhouse. Read more about his experiences in the summery. 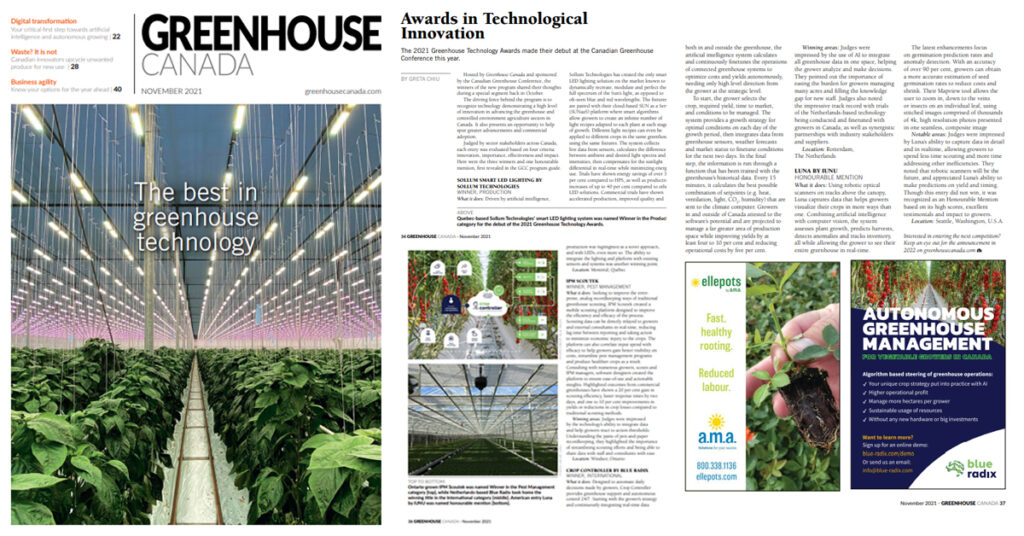 In the November issue of Greenhouse Canada magazine a close look at the Greenhouse Technology Awards that made their debut at the Canadian Greenhouse Conference this year. The article decribes the three winners and one honourable mention. Blue Radix’ Crop Controller is the proud winner in the category International. Read more about of what Crop Controller does and what the winning areas were.

The autonomous greenhouse, the one, every grower is talking about 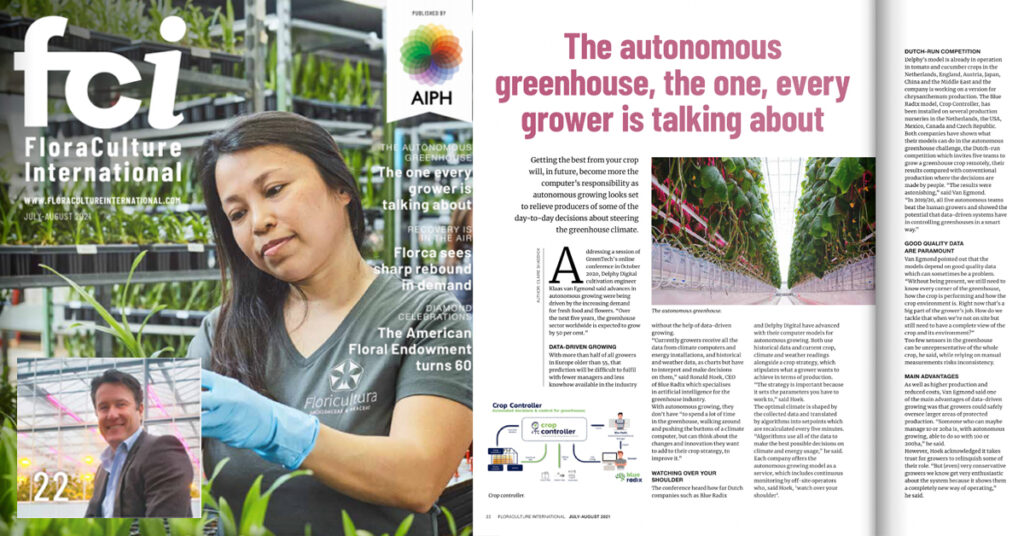 In the July edition of Floraculture International Magazine, Ronald Hoek, CEO of Blue Radix is interviewed about autonomous growing with Crop Controller. Getting the best from your crop will in future become more the computer’s responsibility as autonomous growing looks set to relieve producers of some of the day-to-day decisions about steering the greenhouse climate, the article states. 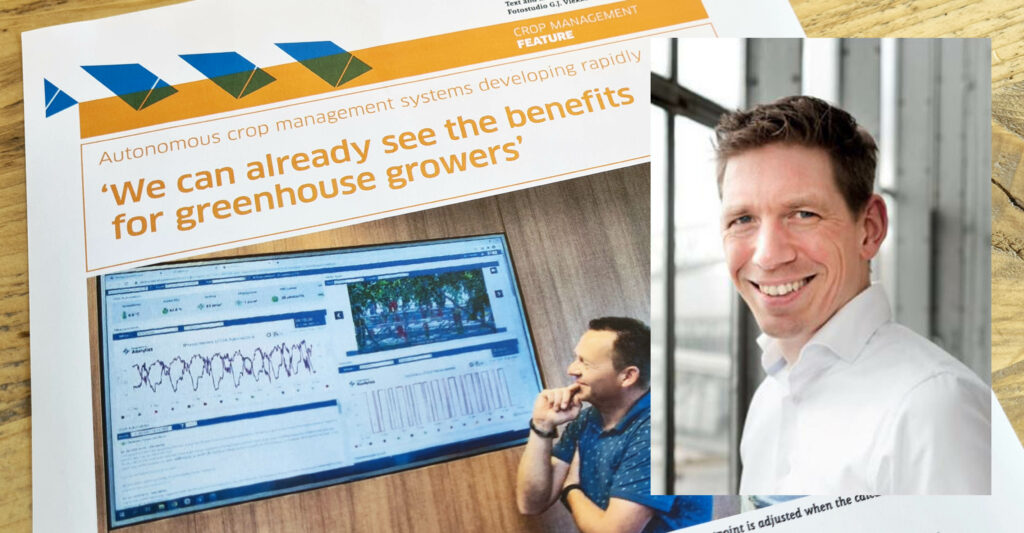 Autonomous growing is undergoing rapid development. That is one of the conclusions of this article in the May issue of the international ‘In Greenhouses’ Magazine. Four Dutch parties who are at the forefront in this field share their experiences. On behalf of Blue Radix, Rudolf de Vetten, Chief Product Officer, shares his vision and expectations.

Subscribe to our newsletter and stay updated on the latest news, developments and special offers!

Subscribe to our newsletter and stay updated on the latest news, developments and special offers!